started a topic almost 5 years ago

However today I had a situation where we needed to combine 4 orders. 3 of them had an address starting '43A' and the 4th had '43a'. This meant they couldn't be merged. I'm pretty sure addresses are not case sensitive so merging 2 orders should not be dependant on this.

Generally I think as long as the names and addresses match (not on case sensitivity) they should be able to be merged.

I can confirm that the checks for merging are not Case Sensitive, so this would not have been the cause for your orders not being able to be merge

The prerequisites for orders to be merged are as follows

Orders can only be merged if they satisfy the following criteria:

If anyone single one of these criteria did not match then this would be why Linnworks would not have allowed your orders to be merged.
Mark Aldous
Head of Implementation
Linn Systems Ltd
P

I know it's your system but I'm afraid I have to respectfully disagree. Maybe it's a desktop thing as we do not use .net, but I can 100% assure you that it was the 43A vs 43a that was causing the problem. Linnworks said there was an address mis-match and as soon as I changed that, it accepted the merge. Maybe it was a bug or maybe it's just a desktop thing, but it was without any doubt that which was causing the problem.

In terms of your list, and this may already be possible on .net, but if the postal services are different, we should have the option of selecting a postal service to apply to the merged order, rather than having to edit the individual orders prior to merge. It is very common that we want to merge 2 orders with different postal services because we often put a second order through as "click and collect" so they don't get charged twice for postage. We then need to amend this order first, and sometimes the original order if they now qualify for free express shipping, just to get it to merge properly.

The different source/subsource issue is covered under the other topic. I've seen other systems do it so it can obviously be done.

Looking at this list, it looks like these requirements are driven by the developers to make their lives easier rather than what is the most user friendly for us users. There are always solutions to allow merging of orders with different currencies, sources, subsources etc. But that would require a bit more database manipulation rather than keeping all elements identical. But that's up to you to decide if it's worth the extra development time :-)

It's happened again and here is the proof that in fact the system is rejecting the merge on a case sensitive basis. This time it's on the customers name rather than the address: 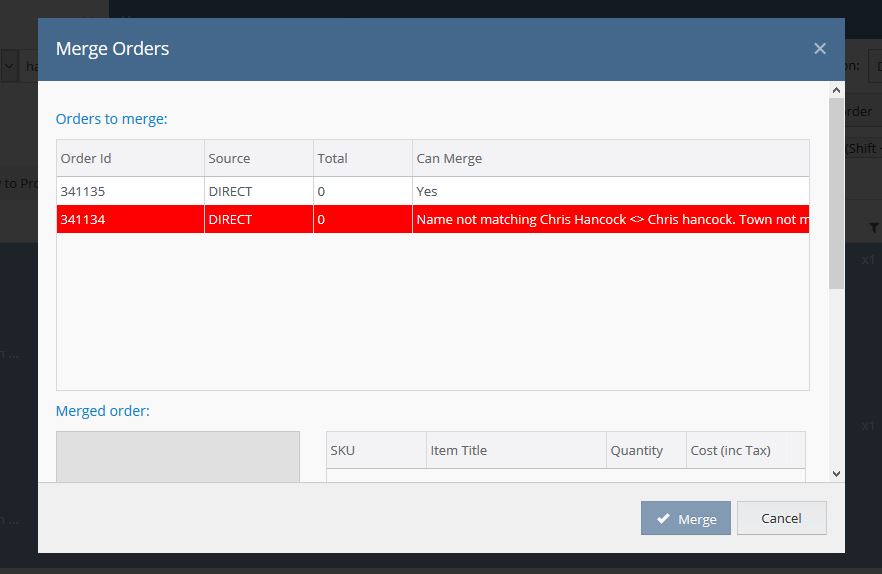 So my request for a "less strict" merging function still stands. It would be good if you could remove the "Not Taken" tag that you've put against this topic, or provide a sensible reason why restricting on case sensitivity is needed.

said almost 5 years ago
By the way, on the screen shot in my last comment, you can see it also says "Town not m...." The whole message here reads "Town not matching. WIGSTON <> Wigston. Once again not allowing the merge due to case sensitivity.

We had a similar issue, using a macro solved the problem for us as follows -

We are using the rules engine to assign postage services, however this means that orders that would otherwise have merged (satisfying current linn criteria) will no longer automatically merge. Is there a script available that will flag up orders that would merge on everything except postage service? I've seen requests for this in the forums but they appear not to have been actioned. If these could potentially mergable orders could be assigned to a folder we can then decide to merge manually despite different postage services.

linn "I think you can try to use the Macro in Linnworks Desktop - Settings - Macros - Add From Template - Order Management - Order Folder Assignment - OrdersToBeMerged. It will move orders with the same attributes to the folder"